There are several lists with a total of 89 different topics scolding PM Stephen Harper.  I am certain the list has grown since last week. As the Prime Minister of Canada he could admit that he made some serious errors during the last four years. I would never suggest Canadians hold their breath waiting for him to say anything honest.

A major story, not on any of the lists, nor mentioned by our glorious news readers has to do with nuclear waste. Thousands of Canadians have tried everything possible to bring the issue to any political parties who will listen. Listen is a key word rarely found in the political realm. It is easier to toss billions of dollars at people than pay attention to what the people have to say. Links to Justin Trudeau of the Liberal Party and Thomas Mulcair of the New Democrats who did not respond to earlier articles. The Green Party did talk about this issue in March, 2015 contact Elizabeth May.

How does it make you feel when you are told a nuclear waste dump is being placed near your town or city? The entire project was kept out of sight until someone attended a meeting and discovered the deal was almost done. 29,000 metric tonnes of nuclear waste will be dumped into a pit 1.6 kilometers, (1 mile), from the Great Lakes.

The diagrams presented are absolutely fabulous.

It appears the artist forgot to place Lake Huron anywhere on the drawing of the nuclear waste dump. All you need to do is place or pour the nuclear contaminated material in one of the shafts and presto the waste is safe. Safe as long as no one opens it within 500,000 years. Safe as long as the earth never shifts. Some of the spokespersons must know something the rest of the world has yet to figure out. One of them stated, earthquake tremors in that area never happen even though the Ontario Government says otherwise. Maybe the O.P.G. Minister of Propaganda sees far beyond the next half million to one million years.

The chosen location in this diagram has blue dot. A blue line points to it on the Ontario, Canada side of Lake Huron. Red areas are current nuclear reactors many with waste semi-stored.

Now that you see the area how do you feel? It is a densely populated area of North America numbering near 60,000,000 people. The Great Lakes are the largest body of fresh water in the world. They supply drinking water to the people, along with many rivers, flowing to and from the Great Lakes. On your behalf I am increasing the list from 89 errors to 90 without mentioning it to the clowns who own and operate big media. We know the lists are being created by people with their own private agendas.

Burying 29,000 metric tonnes of nuclear waste anywhere near the Great Lakes is a very public issue. I do not live near the lakes yet I have a very good understanding of what will happen. Contrary to the so-called media, people are aware, of several nuclear accidents. Where are the plans to evacuate 40-60 million people when the hot nuclear rods shake loose?

Do any of our political leadership candidates in Canada have a secret plan?

The fact is every country using nuclear fuel and/or has nuclear weapons did little or no planning for the toxic waste. Waste comes from nuclear Power Plants, nuclear weapons, nuclear powered submarines and ships, hospitals, research facilities and a wide array of other military weapons.

Our planet is awash with deadly and poisonous nuclear waste. Do you seriously want this material next to your drinking water, city or town?

Take a good look at the number of countries who have deadly nuclear waste piling up. 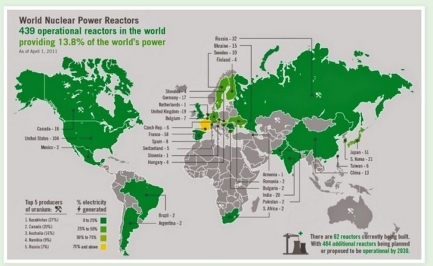 While every political party in Canada, is huffing and puffing about the climate, poison is being dumped into the oceans or stock piled. Ontario Power Generation (O.P.G.) had a stamp of approval by PM Stephen Harper and his Conservatives to move forward on the proposal. At this point it will be up to whoever wins the majority during the October 19, 2015 election to give it the final approval.

While the pseudo environmentalists blame every rain storm on climate change none talk about the most toxic topic Nuclear Waste. Apparently it does not give them enough hits on the donate button.

Below are links to people who do care. Please let them know you care by spreading the word via your social networks. I understand it is tough to get noticed between a billion selfies and gobs of spam.

U.S. Sen. Carl Levin has introduced a resolution urging the Obama administration to oppose a Canadian proposal to bury radioactive waste less than a mile from Lake Huron.

Physics Stack Exchange is a question and answer site for active researcher, academics and students of physics.

Canadian Coalition for Nuclear Responsibility. CCNR is a not-for-profit organization, federally incorporated in 1978. It is dedicated to education and research on all issues related to nuclear energy, whether civilian or military, including non-nuclear alternatives, especially those pertaining to Canada.

Democratic Senators Debbie Stabenow and Gary Peters said they will introduce legislation that would require the U.S. State Department to negotiate with Canada over delaying a decision on the waste facility until the study is completed. Rep. Dan Kildee, a Democrat from Flint Township, said he would offer the same measure in the House.

News That Matters about the Nuclear Industry

Should the public discover the true health cost(s) of nuclear pollution, a cry would rise from all parts of the world and people would refuse to cooperate passively with their own death.

Twitter links are embedded for you with the names. I hope you love this planet too. Will you help us spread the word on this hot and ignored topic?

A Moment on Earth

A Community Blog for all lovers of C-Entertainment

a place where I can talk about dramas all I want

Get To Know People Globally

All Love, No Labels

Stuff That Needs To Be Said

Writing About What Matters to Me.

A Chronicle of Dystopia and Resistance

The Bridge between two countries